MOjA B&B - it is an excellent place to start a new day! 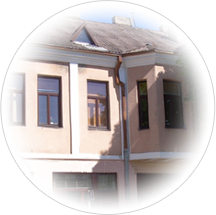 Have you come to Lithuania‘s temporary capital to spend the weekend? Are you in Kaunas on a business trip? Or perhaps you are waiting for visitors and looking for a place to host them?
MOjA B&B is at your service!

MOjA B&B is in the heart of the city – we are located at Gediminas street. Right here is the symbol of Kaunas, Liberty Avenue, the shopping and entertainment center "Akropolis", as well as Kaunas‘ entertainment and sports arena – "Žalgiris Arena". It will take you just 10–15 minutes on foot to visit our city‘s many attractions. Out location is especially convenient to connect with the bus station, the train station and other districts of the city. Vytauto Avenue and Kęstučio street are probably the city‘s best highways served by the public transport. However, the neighbourhood of MOjA B&B surely is a low-noise area.
We have used a renovated early 20th century house to set up cozy rooms. We have renewed the interior of the MOjA B&B that was operating here previously. 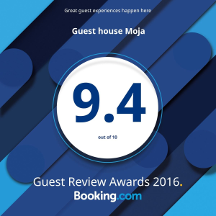 MOjA B&B is especially convenient to stay in for individuals, families and small groups. You are invited to choose between five double rooms and one triple room with twin or double beds. Our second floor rooms have a shared kitchen, while the rooms on the ground floor are equipped with a kitchenette where you can cook the food on your own. For the guests who appreciate home-made meals, our friends - cafe „Basazole“ - will prepare a special breakfast menu with 20% discount (breakfast is served from 8.00 a.m.). 5 double and 1 triple family rooms are designed and furnished for your comfort. MOjA B&B is distinctively comfortable for families or small groups. All our rooms are equipped with separate bathrooms. The guests will get their own keys with access to the rooms at any time. All of our rooms are non-smoking. Various short-term and long-term leasing options are available for a special price! The guests who are staying more than 10 days will receive a discount. 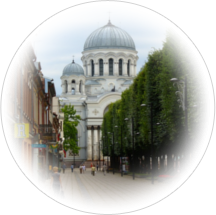 Kaunas, the historical capital of the interwar Lithuania, is located on the junction of the country‘s longest rivers: the Nemunas and the Neris. Chronicles and historical sources first mentioned Kaunas in the XI century.
In terms of transport, Lithuania‘s second largest city is in a very convenient location, close to the middle of the country: it is at a minimal distance from either Vilnius, Alytus, Marijampolė, Klaipėda, Šiauliai or Panevėžys.
The central part of the city and the old town are surrounded by the hills of Aleksotas, Žaliakalnis and Šilainiai. Kaunas is famous for its quiet recreational zones – the Oak Park, Pažaislis and Panemunė groves, Kaunas Lagoon and Yacht Club. History fans might be interested in our ring of nine forts and batteries built in the 19th century, the operating cable cars, one of the oldest in Europe railway tunnel that is 1,285 meters long, and the Napoleon Hill. Legend has it that in in 1812, it was from here that the French military leader watched his troops moving across the Nemunas.
First of all, Kaunas is characterized by having a distinctive relationship between its people and eras of history, architecture objects and cultural phenomena. The city‘s major pedestrian promenades – Laisvės alėja (Liberty Avenue) and its continuation, Vilniaus street – are distinctively fascinating, full of the hustle and bustle of multiethnic students, the city‘s pigeons, artists, costumed clerks and staff, and weirdos who are living several lives at the same time.
The Sun does not show in Liberty Avenue from November to February. However, this does not stop the city-dwellers from focusing on the most important things – after all, this street was designed for everyone to give a taste of one‘s quality and evaluate oneself and others.
Do not be surprised if, when walking down the Avenue, you suddenly find yourself in the lanes of Kaunas‘ history, science, arts or entertainments. Everything is near: the church, the inter-war modernist architecture, cozy cafes and restaurants, the old tiled roofs and courtyards, the bays of of different historical periods, the Christmas tree that is created by artists and is different every year, coffee shops, bistros and bars, concerts, art galleries and museums – for everyone according to their moods and preferences: from the War museum, Devils‘ museum, and Zoological museum to the museum dedicated to Mikalojus Konstantinas Čiurlionis, Lithuanian genius of symbolism.
For those who are always looking for something unique, Kaunas is worth a visit during its cultural events: it traditionally hosts Kaunas Biennial, the festivals "Poetry Spring","Kaunas Photo", and "Kaunas Jazz", as well as performances by dance theater "Aura", "Kaunas Hansa Days", various colourful fairs and folk festivals.